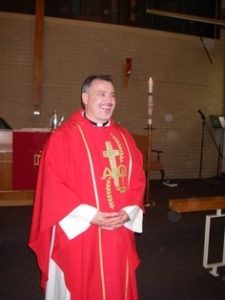 Reverend Robert Grewe was born in Winnipeg, Manitoba Canada and has deep roots in the Lutheran Church. Being a first-generation Canadian the Evangelische Kirch (Lutheran Church) has been the denomination of his northern German family for many generations.

Pastor Rob accepted the call to First Lutheran of Washington PA in November 2013 but was installed in the September of 2014. He loves to tell people why it took so long come to First Lutheran.

He obtained his B.A. in Religious Studies from the University of Winnipeg, Manitoba and his Masters of Divinity from the Lutheran Seminary in Saskatoon, Saskatchewan, Canada. Through the teachings of Rev. Dr. Gordon Jensen he discovered a passion for all things Lutheran including Lutheran theology, high liturgy as well Gospel-based preaching. Rev. Beth Marie Murphy inspired Pastor Rob’s call to pastoral care and chaplaincy. He studied Lutheran Liturgy at Colleg Wittenberg, Germany in 2012.

Pastor Rob’s favourite Lutheran work is the Schmalkald Articles. His favourite book of the Bible is the Gospel of St. John. Pastor Rob enjoys photography, music and model trains. He plays the bass guitar and can often be found singing in all places at all times.

An avid soccer fan, his favourite teams are Hamburg SV (Germany), Wolverhampton Wanderers (England) and the Hearts of Midlothian (Scotland). A highlight was the time spent this summer with his family cheering team Germany to World Cup victory. He has been a Chicago Blackhawks fans since a wee lad (sorry Penguins) and he is slowly warming up to NFL football and the Steelers.

Pastor Rob is happily married to Kimberly Grewe since 1992 and they have two rascally pugs Pippa and Abbey.